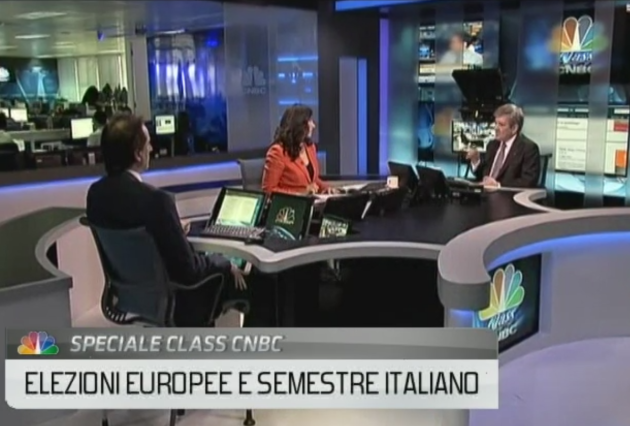 Enrique Barón Crespo stressed the importance of the upcoming European elections, and the need for ever greater political and economic integration throughout Europe, which is currently suffering from a brand management crisis; which has created an atmosphere of popular dissent and Euroscepticism which threatens the foundations of European peace. Barón Crespo stressed that these upcoming European elections are especially important because they are the first elections in EU history which have featured a real “European” electoral campaign, at a time when voter apathy is at its highest.

Nicolas De Santis talked about the launch of the Brand EU Center, which he and Enrique Barón Crespo are jointly leading.

The mission of the BRAND EU – European Union Brand Centre at Gold Mercury International is to assist in the creation of a powerful EU BRAND identity that connects with citizens and the rest of the world. Via our various programmes, we aim to clarify what the EU really is, its global role and where it is going (vision). It is critical for citizens to get involved in the EU project. To achieve this, we must re-position the BRAND EU and show its key benefits, while proposing ways forward, recognising the need for constructive EU reforms. The Centre uses Gold Mercury International’s extensive experience in global branding and identity issues, European Union affairs, strategic visioning and territorial branding.

Despite being the worldwide shining bastion of global governance and peace, the “brand,” or the identity of the EU has not been well managed, understood or communicated to the people. This has created a prevailing atmosphere of disenfranchisement and opposition, to what is undoubtedly an incredible global public good of peace and great stability for us all; given today’s increasingly unstable world. The European Union is the legacy and resolution of centuries of war and conflict in Europe; culminating in World Wars 1 and 2. It is crucial that we do not allow this legacy to be eroded by its own weak marketing strategy which does not reflect the current reality.

The BRAND EU Centre is Gold Mercury’s initiative to resolve this disenfranchisement, and will be run by Enrique Baron Crespo, former President of the European Parliament, and Nicolas De Santis, President & Secretary General of Gold Mercury International. The BRAND EU Centre will unofficially manage the EU’s Branding, and make it communicable and accessible for all citizens; to understand and appreciate.