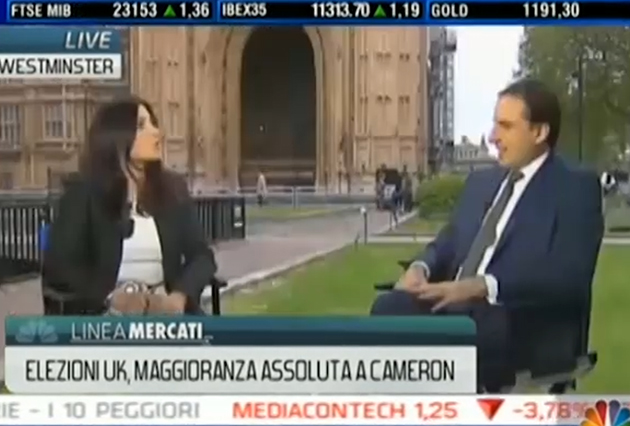 De Santis explained to CNBC Italy anchor Angela Antetomaso, what the dramatic UK election results meant for the future of the UK including the Conservative promise of an EU referendum in 2017. With a clear win by the SNP in Scotland, De Santis believes that the issue of further devolution and a more federal Britain will prop up in the constitutional agenda very soon, creating great tensions in Parliament. He said on the interview:

“We have seen today the resignation of not one but three political leaders: Clegg, Miliband and Farrage. Today the big personal triumphs are for the PM Cameron and Scotland’s First Minister Nicola Sturgeon. Today’s results will reshape the political future of the UK. The question is how these two leaders, of two countries – who now believe in very different futures – can live together or whether they will find that this is impossible“.

In regards to an EU referendum, he commented that there will be two great years of uncertainty, but believes UK will ultimately stay in the EU.

De Santis is an active PRO-EU campaigner in UK and Europe, having established the BRAND EU Centre and re-launching Captain Euro (Europe’s Superhero cartoon used to launch the EURO) to reposition the brand and image of the EU:

“Gold Mercury International and myself are now preparing for the important mission to make sure that UK remains a member of the EU. We will be an active part of the upcoming campaigns and efforts to clarify what the EU stands for, generate a positive perception of the EU and promote its critical role in the world”