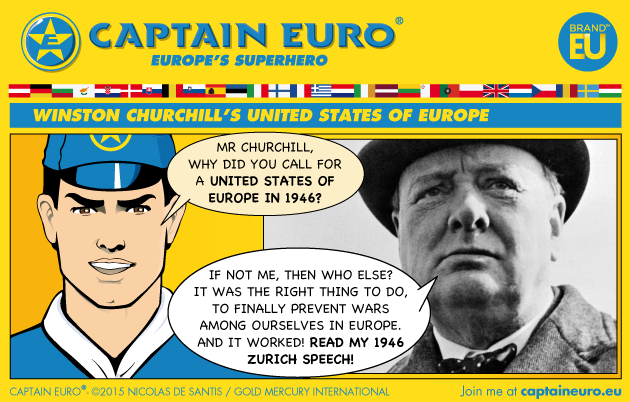 BRAND EU believe Churchill’s work for a united Europe and his 1946 speech are relatively unknown and important to revive on the eve of the 50th anniversary of his death. BRAND EU consider Churchill as one of the founding fathers of the European Union.

It is official! The iconic Sir Winston Churchill called for the creation of a ‘United States of Europe’ in his famous 1946 Zurich speech and presided the first European Federal Congress at the Hague in 1948. He was one of the key fathers of a united Europe and set in motion ideas and events which would develop and grow to become the European Union.

Gold Mercury International, the think tank behind pro EU campaigns Brand EU and Captain Euro, want people to rediscover Churchill’s seminal and vital work in this field, and an area of his political career which is often purposely neglected or ignored.

“Most people do not realise that Churchill, viewed by many as the greatest British statesman of all time, was one of the founding fathers of the European Union and believed in the “European Family” and the “United States of Europe”. We want to make sure in view of the upcoming elections that this work is properly promoted.” says Nicolas De Santis, President of Gold Mercury International.

Gold Mercury International believes that Eurosceptics do not want Churchill’s pro-European stance to be revealed and would prefer his vast body of pro-European work to be ignored.

ARCHIVE RESEARCH AND THE PEOPLE WHO KNEW HIM

Eurosceptics commonly argue that Churchill did not want Britain at the heart of Europe. However, our analysis and research of archives shows that the majority of arguments and quotations from Churchill used to advance this Eurosceptic viewpoint are often wildly misattributed, or taken far out of context.

“It is very clear that Sir Winston, with his incredible political, war and international affairs experience had reached the conclusion that the only way forward for Europe was unity. That is why in his last years he campaigned around Europe to attend events and promote ideas which have led to the European Union as we know it today.” says Nicolas De Santis, President of Gold Mercury International.

Sir Winston Churchill also presided the Hague Congress of 1948, considered by many as the first federal moment of the European history, and attended by 800 delegates from Europe, USA and Canada.

We believe anyone, be they Eurosceptic or pro-European, should listen to or read this inspiring speech, as it opens our hearts to understand why we should be united as peoples. Churchill would be the first to realise that in the world today, an isolated Britain would be dwarfed by the great powers, the United States, Russia, China and India. Britain’s full participation in the European Union is vital, both for Britain and for the rest of the world.

You can listen to Churchill’s Zurich speech here or read a transcript of it here.

Below is a summary of some of the key points and powerful quotes from Churchill’s speech and European vision:

SUMMARY OF KEY POINTS FROM UNITED STATES OF EUROPE SPEECH

Churchill’s vision of Europe was one where we learned from the mistakes of the past and broke the cycle of conflict and bloodshed which has forever plagued Europe’s history. He knew it was the only way forward. From his Zurich speech:

On the United States of Europe

“What is this sovereign remedy? It is to recreate the European fabric, or as much of it as we can, and to provide it with a structure under which it can dwell in peace, safety and freedom. We must build a kind of United States of Europe.” He believed that by uniting and coming together, we would not be conflicting with our national sovereignty and identities or “diluting our culture,” as Eurosceptics so commonly argue, but that we would instead be complementing, and expanding in the speech:

On Identity and Brotherhood

“And why should there not be a European group which could give a sense of enlarged patriotism and common citizenship to the distracted peoples of this mighty continent?” This statement very succinctly sums up European identity. European brotherhood and shared sovereignty is not at odds with national, or even local identity – it complements it and enlarges it. But it requires an act of faith. A leap forward.

On Pooling of Power

Being part of a European family broadens our horizons and compassion. It also serves great political gain. From the speech: “The structure of the United States of Europe will be such as to make the material strength of a single State less important. Small nations will count as much as large ones and gain their honour by a contribution to the common cause.” In this sentence, Churchill crystallised beautifully the power of the European Union, 50 years ahead of its time. In the modern world of global superpowers, the EU allows its component small nations to count as much as the major world superpowers and punch significantly above their weight.

On Preventing Nationalism and Conflict

Churchill had the shrewd political foresight to see that the only way forward for Europe, past the bloodshed and horrors of the previous two world wars, was to unite and form a common governance system. In his speech, he explained: “If Europe were once united in the sharing of its common inheritance there would be no limit to the happiness, prosperity and glory which its 300 million or 400 million people would enjoy. Yet it is from Europe that has sprung that series of frightful nationalistic quarrels…which we have seen in this 20th century and in our own lifetime wreck the peace and mar the prospects of all mankind.”

On the European Family

He identifies firstly that peace and sharing of common inheritance is the best way to ensure future prosperity in Europe, which is a theme he dwells on and an idea that Eurosceptics often deride in today’s society. Churchill believed in the idea of a European family and that we could unite together despite our differences, and that they didn’t have to drive us apart and put up borders between good people: “If Europe is to be saved from infinite misery, and indeed from final doom, there must be an act of faith in the European family and an act of oblivion against all the crimes and follies of the past.”

On Britain’s Place in the United States of Europe

In 1949, in a speech to the European Movement, Churchill explained that:

“The French Foreign Minister, M. Schuman, declared in the French Parliament this week that, ‘Without Britain there can be no Europe.’ This is entirely true.  But our friends on the Continent need have no misgivings. Britain is an integral part of Europe, and we mean to play our part in the revival of her prosperity and greatness… the British Government have rightly stated that they cannot commit this country to entering any European Union without the agreement of the other members of the British Commonwealth. We all agree with that statement. But no time must be lost in discussing the question with the Dominions and seeking to convince them that their interests as well as ours lie in a United Europe.”

At Gold Mercury, we want to draw attention to this especially defining speech of Churchill at this particular time because we believe its message has been lost and that most people are not aware of its existence or significance. A British hero and arguably Britain’s greatest ever statesman, wholeheartedly supported a federal, integrated Europe. He understood the costs of war and realised that the single greatest contribution to peace which could be made was only achievable by us coming together, pooling sovereignty and working towards a cause far greater than ourselves. Learning from the separation and bloodshed of the past and becoming relevant, exemplary players on a global stage.

You can listen to Churchill’s speech here or read a transcript of it here.

On the BRAND EU Centre: The mission of the BRAND EU – European Union Brand Centre at Gold Mercury International is to assist in the creation of a powerful EU BRAND identity that connects with citizens and the rest of the world. Via our various programmes, we aim to clarify what the EU really is, its global role and where it is going (vision). One example of a successful programme is Captain Euro, the newly launched European Superhero, who has taken the media by storm and is designed to give Europeans a fun figure they can identify with. It is critical for citizens to get involved in the EU project. To achieve this, we must re-position the BRAND EU and show its key benefits, while proposing ways forward, recognising the need for constructive EU reforms. The Centre uses Gold Mercury International’s extensive experience in global branding and identity issues, European Union affairs, strategic visioning, communications and territorial branding. The centre is backed by prominent supporters of the European Union including Enrique Baron Crespo, former President of the European Parliament and Todd Ruppert, founder of Ruppert International and former CEO of T. Rowe Price Global Investment Services. For more information, please visit our website: www.brandeu.eu

On Gold Mercury International: Established in 1961, Gold Mercury International is the Global Vision Strategy think tank. Gold Mercury works with companies, organisations and leaders to navigate global complexity and develop the strategic visioning and innovation required to build the sustainable business models, cultures and brands for the future. Since its founding in 1961, Gold Mercury has been a pioneer in developing corporate visioning frameworks that integrate the future in strategic planning, policy and governance. Our CORPORATE VISION SYSTEM® brings together the most important organisational components to define, manage and maintain a corporate future: Strategic Visioning, Global Branding, Business Model Innovation and Organisational & Cultural Transformation. GLOGO® is Gold Mercury’s Global Governance Centre for Sustainable Globalisation. GLOGO® develops future intelligence on the challenges and opportunities of globalisation and the way in which it affects global areas and industries. GLOGO’s unique framework includes a monitoring and rating system to organise world complexity and report on the impact of major decisions and events on the future of our world. For more information, please visit our website: www.goldmercury.org