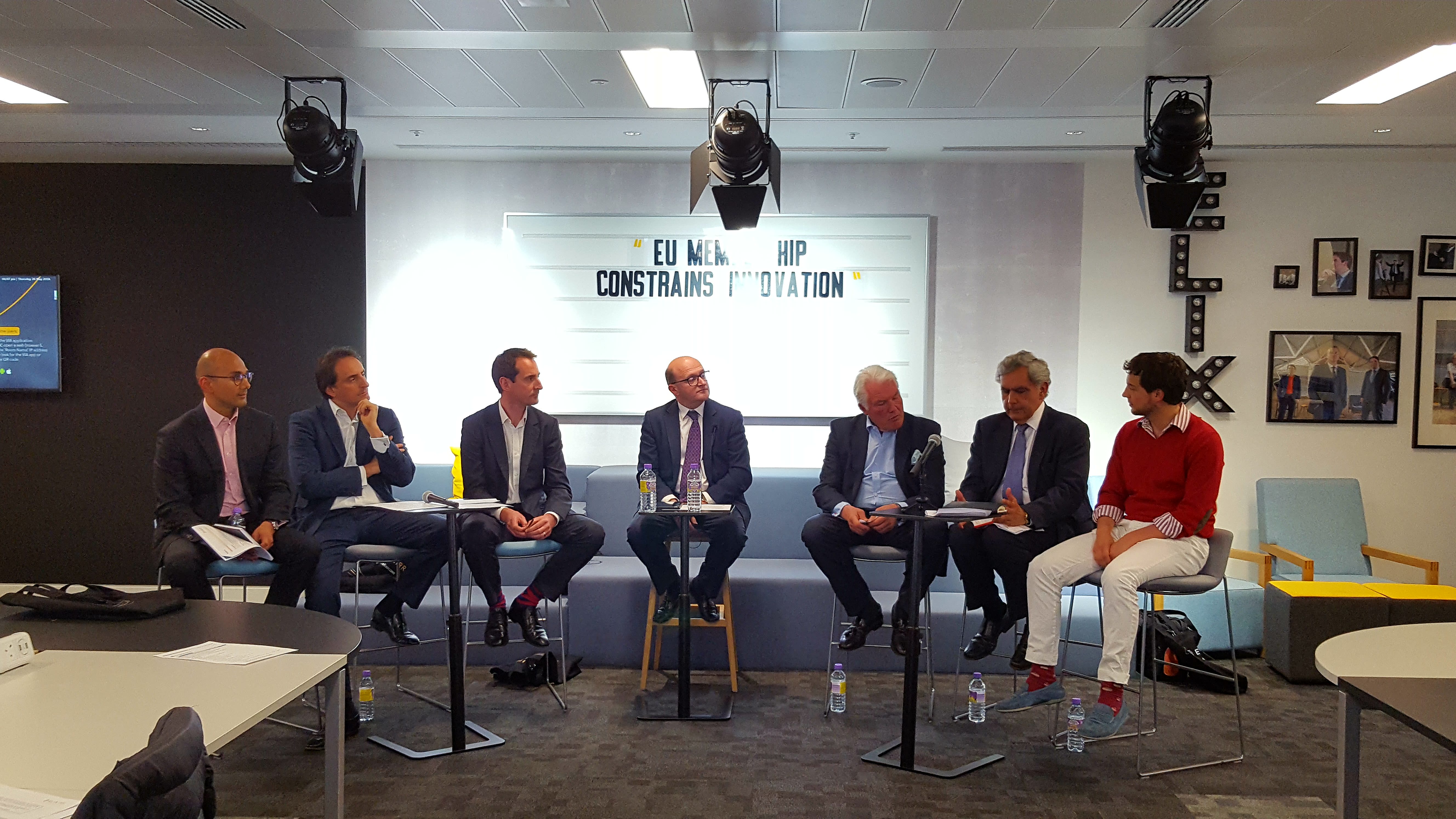 AGAINST THE MOTION: REMAIN IN EU TEAM

FOR THE MOTION: LEAVE EU TEAM:

RESULT: THE DEBATE WAS WON BY THE REMAIN TEAM: The motion proposed by VOTE LEAVE: ‘EU Constrains Innovation’ was defeated by the REMAIN team. The audience voted and defeated the motion by a large margin, concluding that the EU is a critical actor in promoting and fostering innovation in the UK.

Ladies and Gentlemen,
As an internet entrepreneur I am a founding member of OPODO.com, the UK travel company of Europe’s leading airlines, including British Airways, Iberia, Alitalia, Finnair and Lufthansa. We started opodo in the UK but to gain scale we needed to go beyond the UK, we had to compete against our U.S. competitors who enjoy one travel market, so we quickly launched in Germany, France, Spain and many more countries in Europe reaching Euro 1.5 billion in gross sales within a few years. This success would not have been possible without the EU or the single market of 500 million people.

In terms of the EU and innovation I want to make a few quick points:

Point number 1) Science is an interconnected system based on collaboration, not isolation.

According to new UNESCO data, 62% of UK scientific outputs are now international, compared to 39.6% for the U.S. – It is that dynamic which has driven us to overtake the U.S. for science productivity recently, according to a 2013 UK government report. Our funds competitively won from the EU are irreplaceable by national funds as they concern shared infrastructure, talent exchanges and complex high-value international collaborations.

Point number 2) Stephen Hawking wants to stay in the EU…as do the majority of UK Scientists.

Stephen Hawking and 150 Royal Society fellows warned in a recent letter that Brexit would be a ‘disaster for UK science’ – they wrote:

“First, increased funding due to EU has raised greatly the level of European science as a whole and of the UK in particular because we have a competitive edge”.

“Second, we now recruit many of our best researchers from continental Europe, including younger ones who have obtained EU grants and have chosen to move with them here”.

“Being able to attract and fund the most talented Europeans assures the future of British science and also encourages the best scientists elsewhere to come here.”

The letter pointed out that after Switzerland, a non-EU member, had restricted the free movement of workers from the 28-nation bloc it had been forced to look “desperately” for ways to attract talented young scientists. When Stephen Hawking speaks…I listen!

Point number 3) Your government recommends that you vote REMAIN in the EU.

The House of Lords Science and Technology Committee created a call for rigorous evidence on the Relationship between EU membership and UK science: of the key ways our EU membership affects science, research and innovation in the UK. This inquiry has been running since 2015, collecting over 70 written submissions and dozens of oral testimonies from top UK scientists and experts. The April 2016 report concludes:

“The loss of ability to shape EU policy would be a huge blow to UK science, whether we manage to obtain Associate Member status or not.”

The report is no campaigning document. It is about the nuts and bolts of an evolving system. However, the end conclusion is clear as from over 70 written submissions, the inquiry noted only two, which are from campaigns Vote Leave and Scientists for Britain, that advocated a Brexit. The rest of the testimony was fully in line with recent surveys on the science community indicating that the “overwhelming balance of opinion” valued the UK’s full membership of the EU.

Point number 4) If you have a rare disease in your family vote REMAIN.

The value of a single market can be seen clearly in the rare disease sector – medicines for rare diseases (as well as cancer, HIV, diabetes and dementia) and medical devices get a single authorisation to be used in the EU. This can make the distribution of medicines for small populations cost effective, where it might be too expensive to go through regulatory procedures in multiple countries. This could be the difference between accessing a new treatment for a rare disease or not.

Point number 5) The EU Single Market is crucial for innovation.

Nesta – the UK Endowment for Science, Technology that works to increase the innovation capacity of the UK has issued an innovation for Europe report….with 7 key recommendations. What is the number one recommendation of their report?

“To Create an EU single market where digital businesses and technology savvy entrepreneurs can thrive. Digital technologies are changing the world. The EU needs a single market for businesses at the forefront of this revolution.”

Point number 6) Peace is fundamental for innovation and advancing humanity

I will end with a story about a UK scientist. In 1913…at age 26 this scientist discovered the true basis of the periodic table… he discovered that every chemical element’s identity is determined by its number of protons. With this discovery he transformed chemistry for ever…His name was Henry Moseley.

When World War I broke out, Moseley joined the British army and was assigned to the force of British Empire soldiers that invaded Gallipoli, Turkey. Moseley like many thousands more… was shot and killed age 27. Given all that he had accomplished at such a young age, Isaac Asimov noted that Moseley’s death “might well have been the’ most costly’ single death of the War to mankind generally.” Indeed, because of it, the British government established a new policy barring the country’s most prominent scientists from engaging in active combat duty.

Only God knows what he could have invented or discovered…had he lived a long life…Then Europe had WW2…and from 1950…thanks to the EU we have had peace in Europe with a system that united former enemies….to stop war and collaborate in diverse areas. It can get better, but so far it works.

The European Union is an innovation in itself…an innovation in global governance…we are the most successful regional united bloc ever created….THE EU gave us the peace and progress that Moseley would not have taken for granted…and neither should you!

Let’s build on this European success for peace and for innovation and not destroy it by voting to leave the European Union. 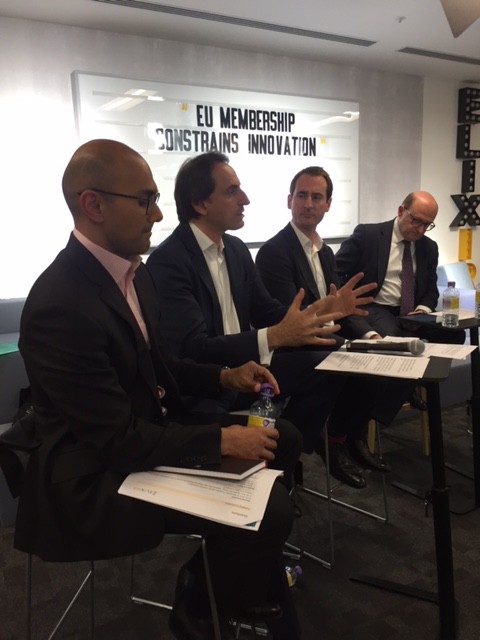 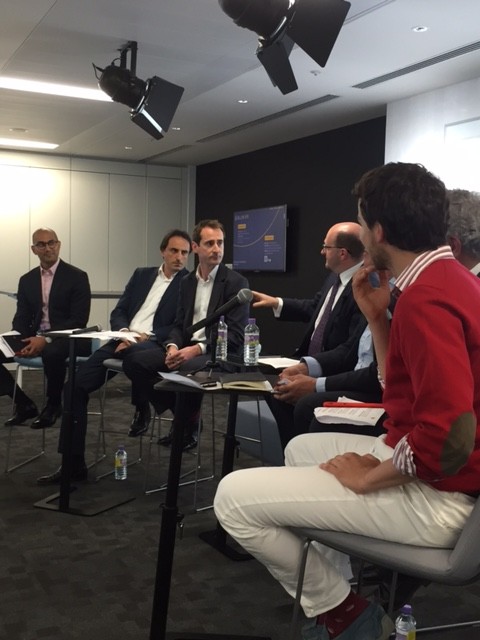