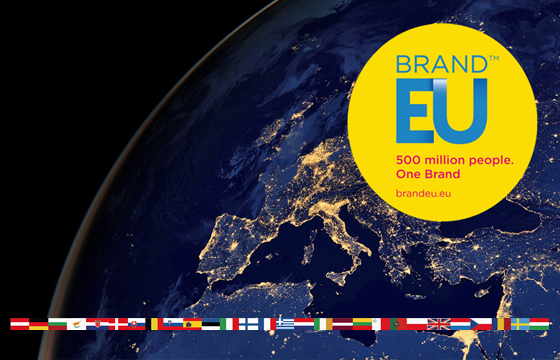 London based Gold Mercury International, the Corporate Vision® Strategy Think Tank, has launched the BRAND EU™ Centre, a pro-EU, independent initiative designed to reposition the European Union’s poorly communicated “brand image” and clarify its future vision. It will also deliver critical analysis and insights on the current state of the EU’s identity, and provide solutions for increased citizen involvement and improved EU governance.

The EU and its institutions are too complex, and EU symbols have failed to connect with the citizens

Gold Mercury’s analysis of the EU brand and institutional framework concludes that the many EU institutions (how the EU works) are too difficult for the public to understand. Also the symbols such as the European Flag, the Euro currency, Europe’s national day (9th of May) and Europe’s anthem (Beethoven’s 9th Symphony) have failed in connecting with the citizens and convey little emotion or clarity about where the European Project is going. Instead these symbols currently represent a distant and complex institutional structure, and the bureaucratic nature of the project. They fail to convey all the benefits of the EU in citizens’ everyday lives.

The EU has maintained peace in Europe for more than 50 years. More recent and practical examples of benefits include: ensuring food safety (like in the horse meat scandal, requesting more traceability in the food chain), making markets competitive (like in reducing mobile phone charges). The lack of an effective EU brand strategy provides a great vacuum that is currently being filled by Eurosceptic and populist, rhetoric based mostly on EU myths and scare tactics.

With the upcoming Scottish Referendum potentially breaking the UK federation, the potential secession of Catalonia from Spain, the requests for other regions to secede from their own countries and the potential UK exit from the EU based on a future referendum, it is clear that a strong and more united European Union is critical to maintain stability in Europe. No country would benefit from the disintegration of Europe; going back to a pre-World War II scenario, and repeating the horrors and chaos of the past.

Clarifying the future vision and BRAND OF THE EU

The mission of the ‘BRAND EU – European Union Brand Centre’ at Gold Mercury International is to assist in the creation of a powerful EU BRAND identity, and clear vision that connects with citizens and the rest of the world. Via its research and various programmes, Gold Mercury aims to clarify what the EU really is (a bastion of stability), shed light on its critical role in the world, and stimulate unbiased discussions concerning where the EU needs to go and what it must evolve into (vision).

Gold Mercury believes that it is now critical for citizens to get involved in this stage of the EU project before they become too disenfranchised. To achieve this, the BRAND EU Centre will help re-position the EU BRAND, and show its key benefits and its weaknesses; while proposing ways forward and recognising the need for a brand reinvention and clarity of vision. Ultimately the centre will propose constructive EU reforms and more efficient EU governance. The BRAND EU Centre draws on Gold Mercury International’s extensive, 50+ years’ worth of experience in building global and institutional brands, and our expertise in global governance, strategic visioning & scenario planning and territorial strategies. Gold Mercury’s team expertise includes brands such as Coca Cola, Iberdrola/Scottish Power, opodo, Prisa (the Spanish Media Conglomerate), Google, Garanti bank, Government of South Africa, the European Parliament and the European Movement.

“Gold Mercury has identified the lack of a clear EU Brand identity as a key obstacle to achieving the full support of its citizens and to the development of Europe as a whole. One of the key branding problems for citizens, which hinders their ability to understand the European Union and participate actively, is the complexity of the current political structure of the EU. It is a hybrid between a federal system and an international organisation. It can be only understood by academics or experts. It is critical that we make it simpler to understand and create a glue; an ‘esprit de corps’ that binds people closer together.” says Nicolas De Santis, President of Gold Mercury International, and global branding expert.

Giving the EU a right to a fair trial. Eurosceptic and populist attacks on EU mostly based on myths, media bias and misinformation to the public.

The research carried out by Gold Mercury, on the Eurosceptic discourse which generates a negative climate of opinion about the EU, finds that it is based mostly on myths and misinformation that can be easily challenged by using real facts. If we analyse a popular Eurosceptic myth, like: “The EU is costly and inefficient”, the reality is that there are fewer than 27,000 full-blown Eurocrats to serve an EU population of more than half a billion people. By contrast, Britain has just under half a million civil servants, 158 times as many as the EU Commission, on a per capita basis. By clarifying the real EU situation, inspiring discussion, and filling the proverbial information vacuum, Gold Mercury aims to shed light on European Union affairs and allow people to reach their own independent judgement of the EU, with all the facts and material presented clearly.

“We Europeans are striving to overcome the ongoing crisis and strengthen our common project. Most of us think that we must go on, by carefully weaving together the fabric of a more United Europe, while others think they are trapped in a spider web. Former President Lula has rightly reminded us that we Europeans do not have the right to cancel a project that belongs to the whole Humanity.” Enrique Baron Crespo, Former President of the European Parliament.

Promoting the core values of the European Union – The EU is a global public good and a great example of international governance and cooperation.

The European Union is the great demonstration that cooperative forms of global governance work. It has united Europe in peace for more than 50 years. Despite being the best example of international cooperation and peace in the world, the “brand,” and communications of the EU have not been well managed, understood or communicated to the people. This has created a prevailing atmosphere of disenfranchisement, and opposition to what is undoubtedly an incredible global public good of peace and great stability in the world; given today’s increasingly volatile world. This needs to be protected and nurtured.

The BRAND EU Centre aims to guarantee that the people of Europe, and beyond, understand the EU, and the universal values which its member states have chosen to represent and defend. Values like liberty, democracy, solidarity, human rights and the rule of law. The EU’s values are universal and global. The BRAND EU is therefore a global brand and a guarantor of these values, and the BRAND EU Centre aims to promote and strengthen this brand.

In order to progress forward with the European project, the BRAND EU Center will develop BRAND EU campaigns, conduct independent research, issue publications and organise events and webinars, which facilitate dialogue around the research topics of the centre between European, national and international authorities, civil society members, corporations and European citizens in different countries. We believe that it is critical for business leaders, public officials, and most importantly – the everyday citizen, to truly understand what the EU really is, how it works, and its vision for the future, as well as to establish a brand identity which all of its citizens can relate to.

The role of the BRAND EU™ Centre involves the following areas:

5. Monitoring the EU Brand and reporting on its progress.

“A United Europe is important for the world. The recent EU-US Summit in Brussels has shown that the European Union as a whole is a key ally and strong partner of the United States, sharing core values of democracy, individual freedom, the rule of law, human rights and a commitment to open societies and economies.  The US and the EU work together in solving global challenges including reinforcing economic growth and job creation. The Summit reaffirmed the ambitious Transatlantic Trade and Investment Partnership (TTIP) that will reinforce an economic partnership that already accounts for nearly half of global output and supports nearly a trillion Euros in bilateral trade and 13 million jobs on both sides of the Atlantic.” Todd Ruppert, Founder & CEO of RTR International and former President & CEO at T. Rowe Price Global Investment Services.

The European Union is the legacy and resolution of centuries of war and devastating conflict in Europe; culminating in World Wars 1 and 2. The EU recently won the 2012 Nobel Peace Prize for advancing peace, democracy and human rights in modern times. We believe that if we are able to clearly communicate what the EU really is and what it stands for in the world, all Europeans (and non-Europeans) will increase their support and involvement in the European project so important for world stability.

Gold Mercury – The Corporate Vision® Strategy Think Tank. Gold Mercury works with organisations and leaders to navigate global complexity and develop the strategic visioning and innovation required to build the sustainable business models, cultures and brands for the future. Since its founding in 1961, Gold Mercury has been a pioneer in advancing global governance and international and economic cooperation in different spheres. GLOGO®, our Global Governance Monitoring and Rating System is a unique framework to organise world complexity and report on the impact of major decisions and events on the future of our world. Our historic GOLD MERCURY AWARDS® for Global Governance exemplify visionary leadership and sustainable decision-making. Our laureates include the most visionary individuals and organisations in the world. Our Visionary Leadership Academy offers executive programmes and Master classes to develop the new leadership and strategic skills required to lead in the 21st Century.

The mission of the BRAND EU – European Union Brand Centre is to assist in the creation of a powerful EU BRAND identity that connects with citizens and the rest of the world. Via our various programmes, we aim to clarify what the EU really is, its global role and where it is going (vision). It is critical for citizens to get involved in the EU project. To achieve this, we must reposition the BRAND EU and show its key benefits, while proposing ways forward; recognising the need for constructive EU reforms.

Brexit is a bad idea and is breaking Britain apart. We work to build a brand vision of Europe that unites people, hearts and minds