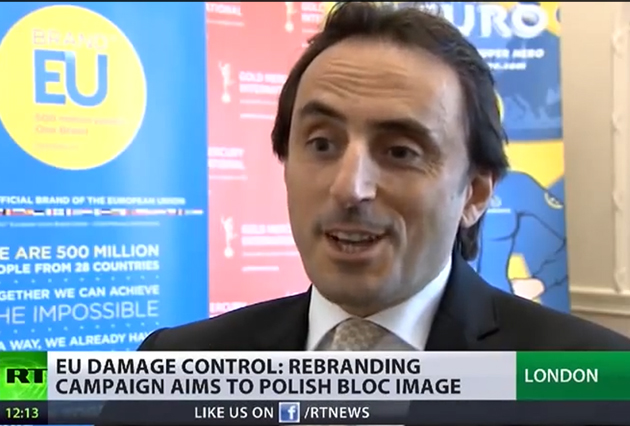 The interview looks into the reasons for the BRAND EU Centre’s creation, and offers a behind-the-scenes glimpse into BRAND EU’s work at its London Headquarters.

“The EU is currently distant and boring; our role is to make it interesting, relevant. So if we can make you smile about it, and we can turn the European Union into something cool that you can actually talk about at a dinner without putting people to sleep, then we’ve done our job.”
– Nicolas De Santis, President of Gold Mercury International, interviewed by Polly Boiko for RT (Russian Television).

At the BRAND EU Centre, we believe in building a strong brand for the European Union; an identity which its citizens can be proud of, fully understand, and support moving forwards. Our work focuses on keeping Europe together and building the Union with the participation of European citizens. To do this and defend the EU from Eurosceptic EU myth making, we need to create a clear vision of Europe and a strong EU brand to support it.

BRAND EU POSTER CAMPAIGNS
The interview also touched briefly on the poster advertising campaigns which have been recently launched, with the aim of creating a completely new approach to talking about the EU and foster a new common European identity.

To further the BRAND EU centre’s goal of making the EU fun and engaging for citizens, the centre has launched the first set of posters in its series of campaigns about the EU – starting by looking at the World Cup. The advertising posters aim to combine humour with serious, emotional messages to elicit a response from the reader and get people thinking about Europe in a new way.

As of today there are still 4 European Union teams contending for the world cup! France, Germany, Belgium and the Netherlands…good luck EU!