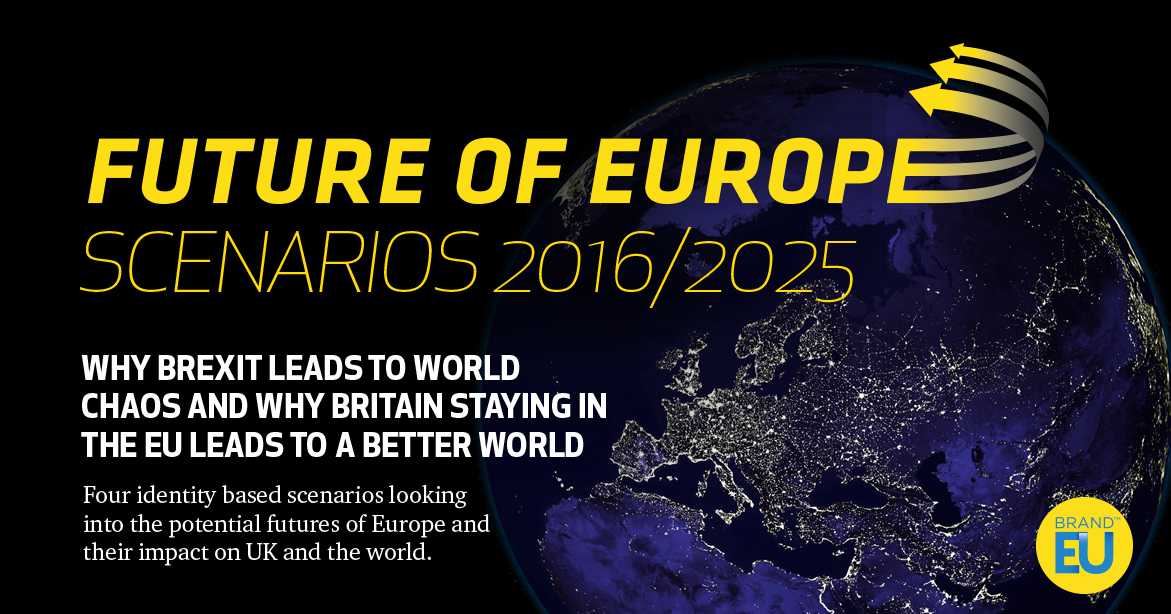 BRAND EU, the independent brand marketing champion of the European Union, presents its latest project and report: “FUTURE OF EUROPE – SCENARIOS 2025”, four scenarios looking into the potential futures of Europe and their impact on UK and the world.

In this report, Nicolas De Santis, President of Gold Mercury International and founder of the BRAND EU Centre, examines how the difference between a ‘Brexit’ or ‘Bremain’ can lead to four very different European scenarios that impact the entire world.

This is a historic vote that can change the future of the entire continent. The scenarios clearly show that Brexit generates long term uncertainty, instability and potentially chaos for the UK, Europe and the world.”

The scenarios are based on two key questions:
1) Will people’s identity become more nationalistic or will they see themselves more as global citizens sharing one planet and universal values?
2) In the future, will Europe be more divided or more united?

These two questions address people’s perceptions of self-identity and how they feel about supranational concepts such as ‘global citizenship’ and ‘European identity/citizenship’. The scenarios also explore what happens if Europe becomes more united or divided.

The aim of this report is to illustrate these diverse scenarios and examine what kind of future each one will bring if certain paths and self-identities are chosen. This analysis is intended to be accessible for everyone and shows clearly that the citizens’ support or opposition to the EU will have a dramatic impact on themselves, their community and the future of the world. As such, the UK’s EU referendum is not merely a national referendum, but a global one.

USING GREEK MYTHOLOGY TO DESCRIBE THE FOUR SCENARIOS
Using ancient Greek mythology as a base, the four scenarios are:
Scenario 1) Icarus’s Fall – Breakdown of Europe
Scenario 2) Ulysses’ Sirens Song – EU: Loss of combined power in the world
Scenario 3) Achilles’ Heel – EU maintains status quo. Rests on its laurels.
Scenario 4) Hercules’ Labours – Team Europe: The EU as a force for good in the world. 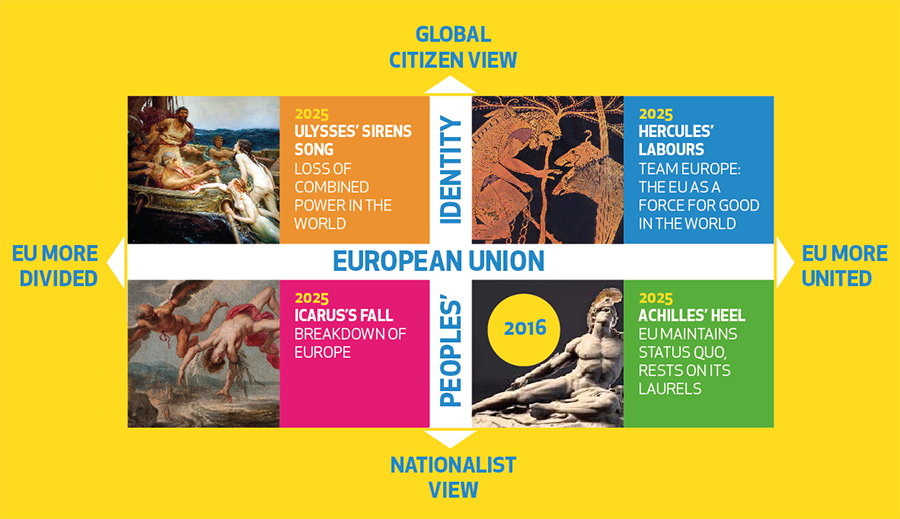 At the same time, the four scenarios focus on six crucial themes relating to the EU: EU Citizenship: Rights and Identity, EU Security and Peace, EU Single Market, Euro Currency, EU Enlargement and Neighbourhood, and The EU as a Global Actor. 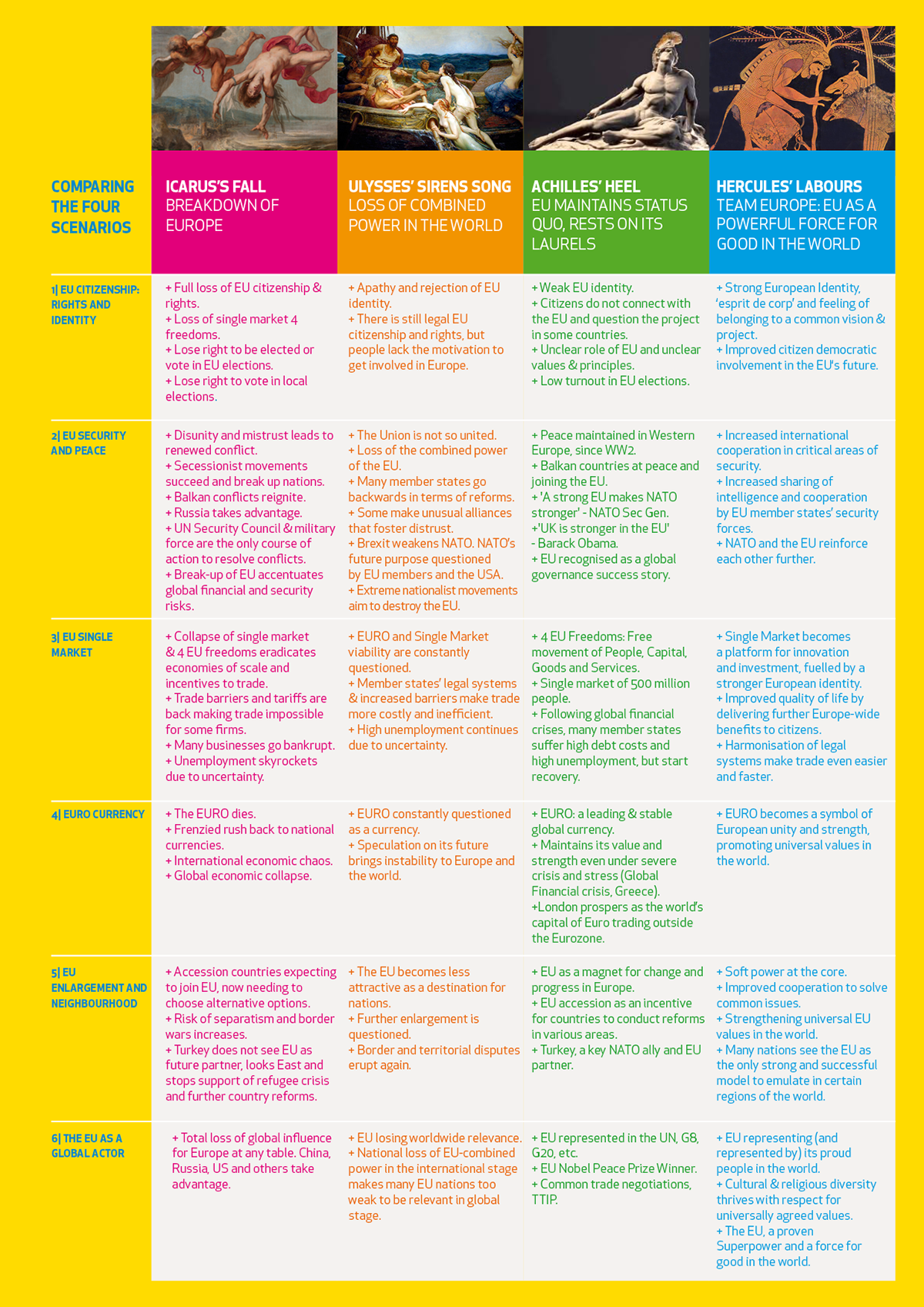 The document provides a ‘big picture’ approach and a future vision of the true meaning and consequences of people’s vote by objectively showing and raising awareness among the population about the risks and opportunities that our present decisions carry on EU matters.

The four scenarios can and must learn from the lessons of the past, especially from the devastating lessons of WWI and WW2, when Europe was disunited, to reflect a very real scenario of a break-up of Europe and to what it can lead to in an uncertain world. An awareness of the different worlds described in these scenarios offers the opportunity to the people of the UK, Europe and the world to realise how important the EU has been in bringing stability to the continent.

From our experience developing strategic vision, this is a simple and clear way of envisaging the most likely four future scenarios for the Union to which we all belong. It’s easy to see in which of them you position yourself, and then, to take a sound decision before the EU referendum”.

As such, the scenarios project is also directed towards all of the European citizens across the 28 member-states and beyond that are in need of some guidance on the future of the European Union. In this way, BRAND EU and Gold Mercury International aim to show the great achievements that the EU has delivered so far and give a portrayal of how said achievements could be further advanced, improved, worsened or even totally destroyed, depending on how the UK votes in the EU referendum.

Scenario thinking is a way of approaching the future that is commonly used as a tool for creating long-term strategy; normally used by private and public sector organisations as well as civil society. Scenarios are tools that are used to define potential futures and paths. They create a frame of reference that decisions can be based on, in order to achieve common desired outcomes. A scenario exercise is innovative and important because in the midst of a deep conflict (like deciding to stay in or leave the EU) it can create a narrative that brings people together from across diverse organisations, affiliations and areas of thought, and teach them to think creatively about the common future of their community, country or continent.

On the BRAND EU Centre: Founded by Gold Mercury International, the Global Vision Strategy Think Tank and Consultancy, the BRAND EU Centre is a London-based pro-EU research and communications centre that works to re-invent the EU’s brand vision and kick-start the new European enlightenment. BRAND EU is generating a people’s movement for the millions that believe in European unity and want to engage actively to innovate and reinvent Brand Europe. As an independent centre, BRAND EU is not funded or affiliated with any EU institutions or governmental bodies, nor is it connected to any political parties. For more information about our activities and projects, visit our website: brandeu.eu

On Gold Mercury International: Founded in 1961, Gold Mercury works with companies, governments, organisations and leaders to navigate global complexity and develop the strategic visioning and innovation required to build the sustainable business models, cultures and brands for the future. For more information, please visit our website: goldmercury.org